In this book Lama Zopa Rinpoche covers  the importance of compassion and universal responsibility and how to make life meaningful, and  offers an amazing and extensive explanation of emptiness, the ultimate nature of reality, and teaching how to meditate on emptiness. Within these teachings, Rinpoche also touches on several of the other main points of the path to enlightenment, such as bodhicitta, the three scopes and impermanence.

See  the Related Links for each chapter to access the audio recordings and read along with the unedited transcripts. 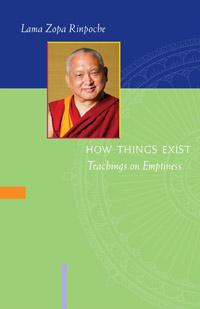 This book is a collection of five talks given by Lama Zopa Rinpoche in New York in 1990. The first two talks, given at Columbia University on September 6 and 7, were public talks aimed at a general audience. In the first talk, Rinpoche focuses on the importance and power of compassion, with special emphasis on how each of us has universal responsibility, responsibility for the peace and happiness not just of the people and animals around us but of all living beings, who are just like us in wanting happiness and not wanting even the slightest suffering.

In the second talk, in the process of giving the oral transmission of a prayer outlining the graduated path to enlightenment, Rinpoche describes the nature of the enlightened state, the different types of happiness we can bring others, the nature of the mind and how the mind exists through a process of labeling. Rinpoche then gives a detailed explanation of how a table exists. (In another teaching, Rinpoche explains that he uses the example of a table so many times in his teachings on emptiness because it is usually the object directly in front of him.) Rinpoche then comes to the explanation of how the I exists, the most important point to understand. To conclude the talk, Rinpoche finally gives the oral transmission of the prayer, as well as the oral transmissions of various mantras. As the talks were titled “Transforming Problems,” a subject he didn’t directly address, Rinpoche then refers the audience to relevant books on thought transformation.

The remaining three talks, given at the Great Enlightenment Temple, in the Bronx, on September 8 and 9 and aimed at a more Buddhist audience, focus mainly on the subject of emptiness. The first talk, after a preliminary meditation on impermanence and emptiness, once again addresses the need for compassion, the types of happiness that can be experienced, and the paths to that happiness. For the rest of the talks, Rinpoche concentrates on emptiness, especially emphasizing how things exist through a process of labeling a base and identifying the ignorance that is the root of all our sufferings, the concept of true existence. Rinpoche uses many examples, including the temple and its atoms, to illustrate his point. Rinpoche also describes various simple meditations on emptiness, as well as how to implement the understanding of emptiness in everyday life, especially in situations where there is a danger of harming ourselves and others.

Rinpoche concludes both sets of talks by reiterating that everything, including our happiness and suffering, comes from our own mind. As Rinpoche says at the end of Chapter 2: “The concept of a truly existent I, of an I having existence from its own side, is the very root of all problems, all suffering. In order to escape suffering, we need to eliminate this root, and for that reason we need to understand the emptiness, the ultimate nature, of the I. That is the essence of this talk.” With simple immediate examples and a minimum of technical philosophical terms, Rinpoche explains very clearly how things—including, most importantly, the I—exist.

With thanks to Claire Atkins for her generous support, to Ven. Lhagsam for providing me with a room of my own, to Ven. Dekyong for her help with research, to the organizers of these talks, to Gareth Robinson and Segen Speer-Senner for transcribing the Columbia University talks and Nick Ribush, Wendy Cook and Jennifer Barlow for their editorial suggestions.

FREE! (plus shipping)
+ View All Teachings