These notes are a literal transcription of the teachings given by Lama Thubten Zopa Rinpoche at the Fifth Kopan Meditation Course, and form an auto-commentary on the course text, The Wish-fulfilling Golden Sun of Mahayana Thought Training.

You may also download the entire contents of these teachings as a PDF file. 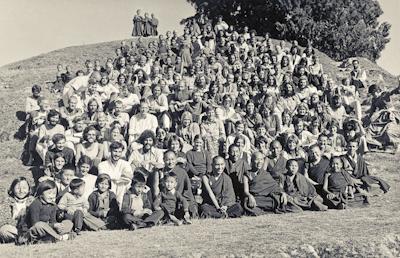 The page numbers referred to in this text relate to the work copy of The Wish-fulfilling Golden Sun used at the Fifth (Nov-Dec 1973) and Sixth (Mar-Apr 1974) Meditation Courses. When Rinpoche read directly from the text book it was not recorded here. These notes are his comments and explanations given during the reading.

The notes were taken longhand so there are a few minor omissions. Also, it is likely that there are some errors due to hearing incorrectly. Furthermore, in punctuating the text it is inevitable that some gross distortions of meaning have occurred, as a result of the complete lack of Dharma understanding in those responsible. The compilers apologize for all this and ask the forgiveness of the Holy Guru through whose infinite kindness this book appears. Yet they hope that it may be of some benefit to mother sentient beings - may all without exception be released from suffering now.

These talks generally follow the table of contents of the first half of The Wish-fulfilling Golden Sun. Therefore, we have used that outline to organize the contents of these teachings.

The Mind is Beginningless

Meditation One: Part I: The Perfect Human Rebirth

Meditation One: Part I: The Perfect Human Rebirth (continued)

Meditation One: Part I: The Perfect Human Rebirth (conclusion)

The Enlightened One's Understanding of Evolution

NOTE: Rinpoche did not cover the text past this point.

Appendix One: The Eight Mahayana Precepts