His Holiness the Dalai Lama 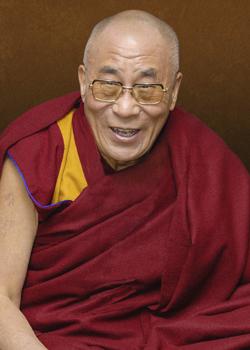 His Holiness Tenzin Gyatso, the 14th Dalai Lama of Tibet

His Holiness the 14th the Dalai Lama Tenzin Gyatso is the head of state and spiritual leader of the Tibetan people. He was born Lhamo Dhondrub on 6 July 1935, in a small village called Taktser in northeastern Tibet. Born to a peasant family, His Holiness was recognized at the age of two, in accordance with Tibetan tradition, as the reincarnation of his predecessor the 13th Dalai Lama, and thus an incarnation Avalokitesvara, the Buddha of Compassion.

Forced into exile in 1959 by the illegal Chinese communist colonization of Tibet, which continues to this day, he has continued to inspire the Tibetan people and also inspires millions of others the world over. In 1989 he received the Nobel Peace Prize for his unwavering advocacy of a non-violent solution to China's brutal occupation of his country.

Read His Holiness' complete biography below.

From the website of the Office of Tibet, the official agency of His Holiness the Dalai Lama in London. www.tibet.net

His Holiness the 14th the Dalai Lama Tenzin Gyatso, is the head of state and spiritual leader of the Tibetan people. He was born Lhamo Dhondrub on 6 July 1935, in a small village called Taktser in northeastern Tibet. Born to a peasant family, His Holiness was recognized at the age of two, in accordance with Tibetan tradition, as the reincarnation of his predecessor the 13th Dalai Lama, and thus an incarnation Avalokitesvara, the Buddha of Compassion.

The Dalai Lamas are the manifestations of the Bodhisattva (Buddha) of Compassion, who chose to reincarnate to serve the people. Lhamo Dhondrub was, as Dalai Lama, renamed Jetsun Jamphel Ngawang Lobsang Yeshe Tenzin Gyatso - Holy Lord, Gentle Glory, Compassionate, Defender of the Faith, Ocean of Wisdom. Tibetans normally refer to His Holiness as Yeshe Norbu, the Wishfulfilling Gem or simply Kundun - The Presence.

The enthronement ceremony took place on February 22, 1940 in Lhasa, the capital of Tibet.

He began his education at the age of six and completed the Geshe Lharampa Degree (Doctorate of Buddhist Philosophy) when he was 25 in 1959. At 24, he took the preliminary examinations at each of the three monastic universities: Drepung, Sera and Ganden. The final examination was conducted in the Jokhang, Lhasa during the annual Monlam Festival of Prayer, held in the first month of every year Tibetan calendar.

On November 17, 1950, His Holiness was called upon to assume full political power (head of the State and Government) after some 80,000 Peoples Liberation Army soldiers invaded Tibet. In 1954, he went to Beijing to talk peace with Mao Tse-tung and other Chinese leaders, including Chou En-lai and Deng Xiaoping. In 1956, while visiting India to attend the 2500th Buddha Jayanti Anniversary, he had a series of meetings with Prime Minister Nehru and Premier Chou about deteriorating conditions in Tibet.

His efforts to bring about a peaceful solution to Sino-Tibetan conflict were thwarted by Beijing's ruthless policy in Eastern Tibet, which ignited a popular uprising and resistance. This resistance movement spread to other parts of the country. On 10 March 1959 the capital of Tibet, Lhasa, exploded with the largest demonstration in Tibetan history, calling on China to leave Tibet and reaffirming Tibet's independence. The Tibetan National Uprising was brutally crushed by the Chinese army. His Holiness escaped to India where he was given political asylum. Some 80,000 Tibetan refugees followed His Holiness into exile. Today, there are more than 120,000 Tibetan in exile. Since 1960, he has resided in Dharamsala, India, known as "Little Lhasa," the seat of the Tibetan Government-in-exile.

In the early years of exile, His Holiness appealed to the United Nations on the question of Tibet, resulting in three resolutions adopted by the General Assembly in 1959, 1961, and 1965, calling on China to respect the human rights of Tibetans and their desire for self-determination. With the newly constituted Tibetan Government-in-exile, His Holiness saw that his immediate and urgent task was to save the both the Tibetan exiles and their culture alike. Tibetan refugees were rehabilitated in agricultural settlements. Economic development was promoted and the creation of a Tibetan educational system was established to raise refugee children with full knowledge of their language, history, religion and culture. The Tibetan Institute of Performing Arts was established in 1959, while the Central Institute of Higher Tibetan Studies became a university for Tibetans in India. Over 200 monasteries have been re-established to preserve the vast corpus of Tibetan Buddhist teachings, the essence of the Tibetan way of life.

In 1963, His Holiness promulgated a democratic constitution, based on Buddhist principles and the Universal Declaration of Human Rights as a model for a future free Tibet. Today, members of the Tibetan parliament are elected directly by the people. The members of the Tibetan Cabinet are elected by the parliament, making the Cabinet answerable to the Parliament. His Holiness has continuously emphasized the need to further democratize the Tibetan administration and has publicly declared that once Tibet regains her independence he will not hold political office.

In Washington, D.C., at the Congressional Human Rights Caucus in 1987, he proposed a Five-Point Peace Plan as a first step toward resolving the future status of Tibet. This plan calls for the designation of Tibet as a zone of peace, an end to the massive transfer of ethnic Chinese into Tibet, restoration of fundamental human rights and democratic freedoms, and the abandonment of China's use of Tibet for nuclear weapons production and the dumping of nuclear waste, as well as urging "earnest negotiations" on the future of Tibet.

In Strasbourg, France, on 15 June 1988, he elaborated the Five-Point Peace Plan and proposed the creation of a self-governing democratic Tibet, "in association with the People's Republic of China."

On 2 September 1991, the Tibetan Government-in-exile declared the Strasbourg Proposal invalid because of the closed and negative attitude of the present Chinese leadership towards the ideas expressed in the proposal.

On 9 October 1991, during an address at Yale University in the United States, His Holiness said that he wanted to visit Tibet to personally assess the political situation. He said, "I am extremely anxious that, in this explosive situation, violence may break out. I want to do what I can to prevent this.... My visit would be a new opportunity to promote understanding and create a basis for a negotiated solution."

Since 1967, His Holiness initiated a series of journeys which have taken him to some 46 nations. In autumn of 1991, he visited the Baltic States at the invitation of Lithuanian President Vytautas Landsbergis of Lithuania and became the first foreign leader to address the Lithuanian Parliament. His Holiness met with the late Pope Paul VI at the Vatican in 1973. At a press conference in Rome in 1980, he outlined his hopes for the meeting with John Paul II: "We live in a period of great crisis, a period of troubling world developments. It is not possible to find peace in the soul without security and harmony between peoples. For this reason, I look forward with faith and hope to my meeting with the Holy Father; to an exchange of ideas and feelings, and to his suggestions, so as to open the door to a progressive pacification between peoples." His Holiness met Pope John Paul II at the Vatican in 1980, 1982, 1986, 1988 and 1990. In 1981, His Holiness talked with Archbishop of Canterbury, Dr. Robert Runcie, and with other leaders of the Anglican Church in London. He also met with leaders of the Roman Catholic and Jewish communities and spoke at an interfaith service held in his honor by the World Congress of Faiths: "I always believe that it is much better to have a variety of religions, a variety of philosophies, rather than one single religion or philosophy. This is necessary because of the different mental dispositions of each human being. Each religion has certain unique ideas or techniques, and learning about them can only enrich one's own faith."

Since his first visit to the west in the early 1973, a number of western universities and institutions have conferred Peace Awards and honorary Doctorate Degrees in recognition of His Holiness' distinguished writings in Buddhist philosophy and for his leadership in the solution of international conflicts, human rights issues and global environmental problems. In presenting the Raoul Wallenberg Congressional Human Rights Award in 1989, U.S. Congressman Tom Lantos said, "His Holiness the Dalai Lama's courageous struggle has distinguished him as a leading proponent of human rights and world peace. His ongoing efforts to end the suffering of the Tibetan people through peaceful negotiations and reconciliation have required enormous courage and sacrifice."

The Norwegian Nobel Committee's decision to award the 1989 Peace Prize to His Holiness the Dalai Lama won worldwide praise and applause, with exception of China. The Committee's citation read, "The Committee wants to emphasize the fact that the Dalai Lama in his struggle for the liberation of Tibet consistently has opposed the use of violence. He has instead advocated peaceful solutions based upon tolerance and mutual respect in order to preserve the historical and cultural heritage of his people."

On 10 December 1989, His Holiness accepted the prize on the behalf of oppressed everywhere and all those who struggle for freedom and work for world peace and the people of Tibet. In his remarks he said, "The prize reaffirms our conviction that with truth, courage and determination as our weapons, Tibet will be liberated. Our struggle must remain nonviolent and free of hatred."

He also had a message of encouragement for the student-led democracy movement in China. "In China the popular movement for democracy was crushed by brutal force in June this year. But I do not believe the demonstrations were in vain, because the spirit of freedom was rekindled among the Chinese people and China cannot escape the impact of this spirit of freedom sweeping in many parts of the world. The brave students and their supporters showed the Chinese leadership and the world the human face of that great nations."

His Holiness often says, "I am just a simple Buddhist monk - no more, nor less."

His Holiness follows the life of Buddhist monk. Living in a small cottage in Dharamsala, he rises at 4am to meditate, pursues an ongoing schedule of administrative meetings, private audiences and religious teachings and ceremonies. He concludes each day with further prayer before retiring. In explaining his greatest sources of inspiration, he often cites a favorite verse, found in the writings of the renowned eighth century Buddhist saint Shantideva:

For as long as space endures
And for as long as living beings remain,
Until then may I too abide
To dispel the misery of the world.

His Holiness the Dalai Lama's name mantra is:

Please note that there are two Name Mantras for His Holiness the 14th Dalai Lama.  Both are correct according to Lama Zopa Rinpoche. You can find a PDF with both the mantras here. The alternate name mantra is:

Teachings by His Holiness the Dalai Lama