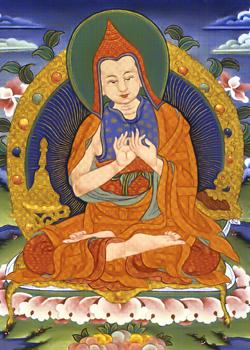 The great Indian pandit and yogi, Atisha Dipamkara Shrijnana (982–1054), was born into a royal family in East Bengal, India. He was given the name Chandragarbha, meaning “Moon Essence”, and was later given the name Atisha, meaning “peace,” by the Tibetan king Jangchub Ö. There were many auspicious signs at the time of Atisha's birth, and from his very early childhood, he displayed an unusually peaceful and compassionate nature, and an aspiration to spiritual practice.

After years of study and practice with renowned teachers, Atisha became famous for the brilliance of his teachings, and his unparalleled abilities in debate, and was appointed abbot of Nalanda Monastery, the greatest of all Buddhist monasteries in India.

Atisha was invited to Tibet to re-establish the Buddhadharma, which had been suppressed and corrupted for almost two centuries. He stayed in Tibet for 17 years in total. His clear and pure teachings initiated a golden age of Dharma in the Land of Snows.

Atisha wrote the seminal text, A Lamp for the Path to Enlightenment, in which he extracted the essence of all 84,000 teachings of the Buddha and organized them into clear steps, known as lam-rim, or stages of the path to enlightenment.

Read more about Atisha's life in The Life of Atisha, a short teaching by Lama Zopa Rinpoche.